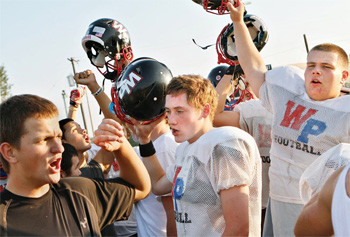 Stirling (center)
He wanted to head to Eastern Washington and forget his past, get away from his troubles with the law, the drinking and the drugs, the bad grades, and even the football.

When Stirling, 17, was forced to leave his life in Mill Creek, a Seattle suburb, and head east to the Master’s Ranch Youth Ranch in the hinterlands of Eastern Washington, the last thing he wanted to do was to continue to play a sport he didn’t enjoy.

Yet there was his mom, Donna Rae, on the phone with the athletics director of the youth ranch near Eureka, Wash., telling the Master’s Ranch staff that they had a gifted quarterback headed their way.

It took a year, a mental and spiritual change, some deep relationships, and the structure of the boarding school, but now Eastman is glad his mom made that phone call.

And he now embraces the challenge of representing the 1,235-person community of Waitsburg-Prescott and the 60 Master’s Ranch students.

Eastman comes from a long line of quarterbacks. His dad Eric Eastman was a quarterback for a year in the Canadian Football League, and also played in semi-professional leagues in the U.S. and Canada.

Many of his uncles played the position in college.

And young Stirling was drilled for countless hours on the position by his father.

“A lot of the kids my age were doing YMCA basketball and getting into AAU basketball, and that is what I wanted to do,” Stirling said. “But he told me I wasn’t going to be 6-6 and I wouldn’t be able to dunk, so basketball would be a waste of time.”

Stirling’s parents divorced when he was 3, though his father remained in his life until halfway through his eighth-grade football season.

Earlier that summer, his mom had gotten divorced and his two stepsiblings had left.

His older brother, Shane, was sent to Master’s Ranch.

And he and his mom were forced to move into an apartment and his mom had to work three jobs to pay the bills.

That’s when Stirling began experimenting with drugs and alcohol, shoplifting and trying to fit in any way he could.

“I pretty much tried to intoxicate myself every day, or at least every other day,” he said. “I started drinking a lot and doing different drugs, and fell into that habit and prioritizing that over school.”

After two misdemeanors for stealing, he was told a third conviction would mean time served at a juvenile hall.

Stirling’s older brother Shane had gone to Master’s Ranch in 2010, and Rae brought him home after a year, hoping he could help Stirling.

The plan backfired as Shane eventually reconnected with his old friends, and Stirling soon followed.

They were running with the wrong crowd, and his mom was getting fed up. She came home from work one day to a trashed house after Stirling and Shane had a party.

She called Master’s Ranch that night, and dropped Stirling off a week later.

Stirling thought Master’s Ranch would be easy. But he was in for a rude awakening.

While life wasn’t easy there at first, he did make some connections that changed him.

“His desire for the negative has totally left,” said Jamaal Johnson, who runs the horsemanship program at Master’s Ranch and is Stirling’s mentor.

“I think he has more of a desire to do the right thing. With maturity, I see he wants nothing to do with his old life. The drinking, the partying — he doesn’t glorify that or talk about that in a boastful way.”

A shift in focus 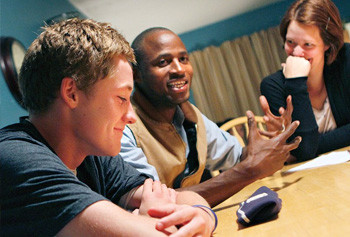 With the alcohol and drugs out of the way, Stirling has more time to worry about school, his budding spirituality and his new football team.

Stirling was one of a handful of Master’s Ranch kids to join the Waitsburg-Prescott football team in 2011.

He was the backup quarterback, starting three games for the JV team, and playing in a handful of games at defensive back.

At the end of the year, he was told if he came back, he would be the starting quarterback.

Most Master’s Ranch boys, who range in age from 13 to 19, finish the Christian-based program — which takes 12 to 15 months — and leave, so they only play for the football team for one season.

But Stirling showed promise, and coach Jeff Bartlow wanted him to know he would be welcome back with the team.

“He’s matured,” Bartlow said. “All those kids have to grow a little bit. They get there right off the bat, and they are a little rough around the edges. He has a good sense of humor. I like him a lot.”

The transition with the public school kids hasn’t always been easy.

He is the first Master’s Ranch student to start at quarterback for W-P since the schools merged for football in 2007.

For the most part, though, the kids on the team have responded to him.

And while he isn’t a vocal leader, or even a team captain, he works hard and tries to lead by example.

“I think to be a trail blazer is always hard,” Jamaal said.

“The fact that he takes it on, and knows what it means to Master’s Ranch. … I think a lot of kids buckle under that pressure.

“I like the way he faces it with confidence and understands that he is not perfect, but goes out and tries his best. And that is all you can do.

“This guy eventually has Prescott on his back, Waitsburg and also Master’s Ranch. That is a lot to carry for a 17-year-old kid.”

Even Dalton Estes, an all-state wide receiver last year who goes to Waitsburg, sang Eastman’s praises, despite losing the quarterback competition to him.

“I was actually really fortunate, because I really wanted to play receiver because that is my pride and joy,” he said. “I’m glad he won it, because I trust him back there.”

And it is a role that Stirling is slowly embracing.

“I’m proud to have my teammates count on me,” he said. “It’s an honor to allow a Master’s Ranch kid to play such a big role. Really, I’m playing football for the town of Waitsburg.”

Stirling plans to graduate in the middle of 2013.

He then wants to go to Azusa Pacific in California to get his prerequisites in medicine with hopes of eventually becoming a physician’s assistant.

“I feel like I have reinvented myself,” he said, “because my priorities are way different.”

Master’s Ranch – West is a structured, Christian residential program for teenage boys age 9-17, located on the Snake River in Eastern Washington. Our relationally oriented program is specifically designed to meet the needs of young men that are struggling with behavioral issues or who are underperforming in school.

We provide a safe Christian environment where students can recover from adverse childhood experiences such as: abuse, major loss, parental failure, or adoption.

Welcome from Our Founder and Director

“Boys usually don’t like or understand the decision you are called upon now to bravely make. But over and over we have heard those same boys later thanking God that their parents sent them to Master’s Ranch, not away from their family, but to their help and hope. In a few months, you will be amazed with the poise, confidence and respect you will experience with your boy. It will be as though the old angry, anxious, and a troublemaking boy was just a bad dream. You’ll get your real boy back, the one you knew before things went haywire. He’ll be ready to rebuild a relationship with you and excited to plan for the future.
And now, due to the success of our Missouri Ranch, we’ve started a new program here in Washington State in a completely turnkey therapeutic facility, developed by the largest privately owned orchard in America. God brought us this awesome campus so we can help even more boys. God is so good, and that is what we teach the boys every single day.”