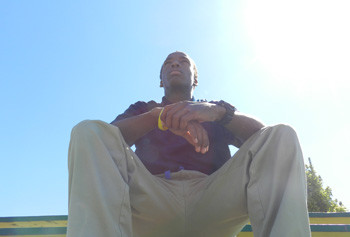 James Thompkins is one of those guys where you can’t help but smile when you’re around. He has a joy for life and a realness to him that is contagious. James, age 17, moved to Master’s Ranch from Chicago IL because he was doing poorly in school. His mom told James and his brother about Master’s Ranch and told them that she wanted them to go. The road to Master’s Ranch wasn’t an easy one at first with James missing his train the first two tries in ways to avoid Master’s Ranch, but eventually He decided that there was no getting around coming out to Master’s Ranch so he figured he might as well make the best of it.

When James first got out to Master’s Ranch he admits it was hard to adjust. “I didn’t like it at first here because of the computer learning. I wasn’t used to it,” explained James, “But eventually I got used to it and found out ways to make it work”. Besides being able to get school work done James also said that Master’s Ranch has helped him learn how to talk to people better, and helped him to gain a better sense of respect for his Stepfather.

James says his favorite part of Master’s Ranch is definitely the opportunities he has here compared to home in Chicago. When I asked him about those opportunities he said “Definitely sports: Track, Football, and Basketball which I couldn’t do in Chicago because my grades were too bad, and I never went to school.” Since coming to Master’s Ranch however James has been able to compete in both Football and Track at the state level and looks forward to competing at a high level again this year. Another positive aspect of Master’s Ranch for James is the relationships that he has built over the time he’s been here with both students and staff. Relationships that he says he’ll carry with him far after he finishes his time here.

When asking James about the future and what he feels he’s learned during his time he replied “It helped me learn how to be a good leader instead of a bad one, and how to live so people follow me and I don’t follow them.” James plans on moving to Arizona after he graduate and to attend a college for Firemen to obtain da license. He already has plans to start down his goal by becoming a volunteer fireman after he turns 18.

Finally I asked James if he had any advise for students getting ready to enter the program. He thought for a minute and then said “If you come here try to follow the rules and listen. Try your best even though no ones perfect and try to stay around the upper levels that are doing the right thing and have been here for a while. If you are to be a follower follow the right people and if you are going to lead then lead the right way.”

Master’s Ranch – West is a structured, Christian residential program for teenage boys age 9-17, located on the Snake River in Eastern Washington. Our relationally oriented program is specifically designed to meet the needs of young men that are struggling with behavioral issues or who are underperforming in school.

We provide a safe Christian environment where students can recover from adverse childhood experiences such as: abuse, major loss, parental failure, or adoption.

Welcome from Our Founder and Director

“Boys usually don’t like or understand the decision you are called upon now to bravely make. But over and over we have heard those same boys later thanking God that their parents sent them to Master’s Ranch, not away from their family, but to their help and hope. In a few months, you will be amazed with the poise, confidence and respect you will experience with your boy. It will be as though the old angry, anxious, and a troublemaking boy was just a bad dream. You’ll get your real boy back, the one you knew before things went haywire. He’ll be ready to rebuild a relationship with you and excited to plan for the future.
And now, due to the success of our Missouri Ranch, we’ve started a new program here in Washington State in a completely turnkey therapeutic facility, developed by the largest privately owned orchard in America. God brought us this awesome campus so we can help even more boys. God is so good, and that is what we teach the boys every single day.”